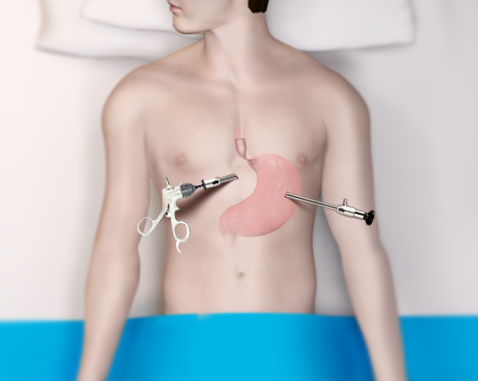 Laparoscopic surgery is a minimally invasive procedure which involves the use of a lighted viewing tube called a laparoscope which is introduced through a small incision (keyhole size) on your abdomen and can provide a well-illuminated and magnified view of the structures within. A miniature camera present inside the tube displays images on a monitor which guide your doctor to perform surgery with the help of special instruments introduced through the laparoscope or other similar incisions.

Laparoscopic surgery is mostly performed to treat gastrointestinal disorders which traditionally required large abdominal incisions. It may be used to perform surgery to the stomach to treat conditions such as:

Pyloric stenosis: Thickening of the muscle at the lower end of the stomach which can obstruct the passage of food. During laparoscopic surgery, your doctor will view the pylorus and make a longitudinal cut to spread the muscle out and relieve the narrow outlet.

Tumors: Laparoscopic gastrectomy may be performed to remove all or part of the stomach along with a tumor

GERD: Regurgitation of acidic stomach contents into the lower esophagus causing heartburn and abdominal pain. Laparoscopic surgery may be used to perform anti-reflux surgery if conservative therapy is ineffective.

Achalasia: Failure of valve at the junction of the esophagus and stomach to relax causing difficulty swallowing. Laparoscopic surgery may be performed to dilate the valve or perform an esophagomyotomy which involves cutting the muscle tissue.

Bariatric or weight loss surgery may also be performed laparoscopically. This usually involves reducing the size of the stomach and bypassing a portion of the intestines.

Most laparoscopic procedures can be performed on an outpatient basis or may require a short stay at the hospital. Other benefits of laparoscopic surgery include decreased operating time and bleeding, reduced postoperative pain and a low risk of complications.